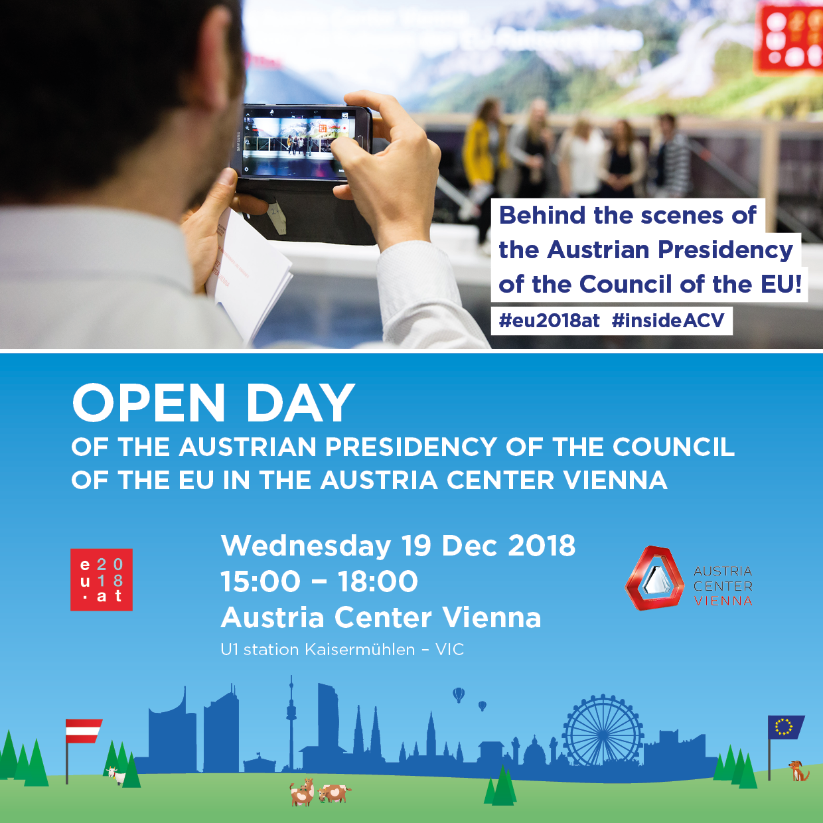 Experience Europe at first hand: The Austrian Presidency of the Council of the EU invites you to its open day on 19 December

Have you ever wondered what it’s like being a minister? If so, then come along on 19 December to the open day of the Austrian Presidency of the Council of the EU and the Austria Center Vienna.

Austria Center Vienna, can be reached by the U1 underground line, station Kaisermühlen – Vienna International Center

In the second half of 2018, Austria took over the presidency of the Council of the European Union for the third time after 1998 and 2006. The majority of meetings of ministers and officials are held in the Austria Center Vienna. One of the events taking place here is the High-Level Forum Africa-Europe on 18 December, which will bring together numerous European and African heads of state or government in Vienna.

On the following day, the Austria Center Vienna will open its doors and invites anybody who is interested to come along between 15:00 and 18:00 to take a look around the event venue which is usually only shown on the news: You will first be able to view the arrival area – the “doorstep” where ministers give their first interviews – followed by the “handshake” area, where guests are welcomed. You will then move on to the plenary hall in which press conferences take place and finish the tour with a visit to the family photo area, where delegates gather for the group photo.

During your visit, you will gain exclusive insights and have plenty of opportunities to take photos. The Austrian Presidency team will also be on hand at various information points to provide interesting background information and will happily answer any questions.

We cordially invite you to attend our open day. Participation is free.

More information can be found on the website of the Austria Center Vienna (ACV): https://www.acv.at/karussell/karussell3.html (German only)